Ever been to the salon or the barbershop and the person tending to your beautiful mane makes a complete mess?

Recently, I won’t say when – Candice decided to visit the salon to get her locs some extra love in the midst of a restriction lifted pandemic struck country. She was overdue a proper grooming and deep cleanse, anyway.

The day was on the upward trajectory. It included my shampoo, condition, grooming of the locs, oiling and moisturising of my scalp and hair from root to ends. It was the overall hair care regimen.

I even took the day a step further by getting a pedicure and shaping up my eyebrows.

After all, it was a self-care kind of day.

I was about 10 minutes from being done at the salon when my sistren asked one of her employees to trim my hair. Small sections were a bit fuzzy and you know, you want everything in tip-top shape so a little trimming would do the trick.

Little did I know that a little trim would [unintentionally] lead to a big chop.

I sat in the chair and the young lady held the scissors in her hand and began to trim away some of the fuzz. She went by really fast as if in a hurry. At this point, she could be referred to as Ms Scissorshands. Yeah? Yeah.

The first thought that came to me was…”i hope shi nuh bodda end up a chop off mi hair ennuh”.

People, as the thought came to me, I see homegirl stop as if frozen in time for a few seconds. She turned to my sistren (her boss) and whispered something. I’d like to guess that it was something like, “I accidentally cut off her hair”. Cause after that, I see one individual loc looking about 2 inches long while the rest of that loc lay on my shoulder, not attached to my head. It had fallen on my left shoulder like a tree having fallen in the forest.

Here’s a view giving an indication of how long my hair is. 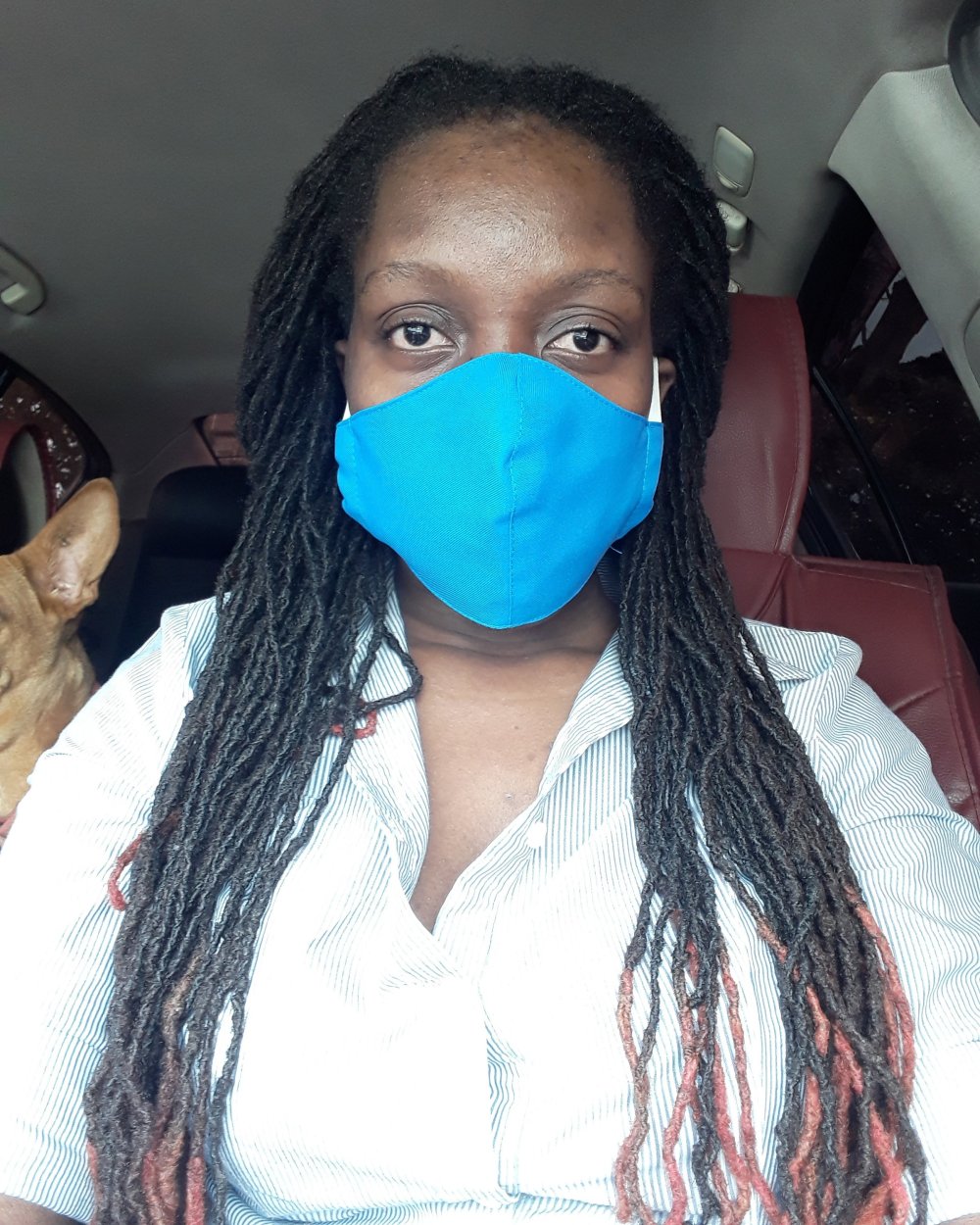 Candice was shocked beyond words, the unlucky hairstylist was visibly shaken.

Needless to say, I went silent for the remainder of my time there and everyone else did what they had to do to maintain a sense of professionalism despite what had just ensued.

My sistren used hair thread to sew my mangled loc together. So now, I have a bum loc. Haha.

Apologies were made and reprimand took place – but not completely in the presence of other clients in the shop. Thank God. Cause that would’ve been embarrassing.

I didn’t want to lose my cool because I knew it was all accidental. Even though my heart broke cause I’ve invested time, money, love and other resources in my hair – only for this to happen.

I also maintained my composure because I know what it’s like to make a mistake or have an accident that could cost relationships with clients and my boss embarrassed me. I’d never want to do that to someone else.

So I said nothing except:

“no worries. It’s hair and it’ll grow back”.

Yes, my hair will grow back. But, Jah know. If i was hormonal, I probably would’ve cried my eyes out. Besides, after the stitch work, no one would ever know.

I was high key upset.

My sistren, (owner, head stylist and amazing loctitian) has been on my loc’d journey with me so she knew and understood how I felt without me having to say anything.

She dealt with the problem accordingly and did so quite professionally. Happy for that. Otherwise, the young miss would’ve been even more traumatised.

You know, that experience was traumatic for all parties involved.

Backstory to my loc’d journey

I’ve had conversations with my hair. I’ve played music for my hair. I treat it right and I water it. As a result, my locs have grown and continue to flourish. In truth, hair is like a plant/tree and in order for it to grow, you have to give to it what it needs to spring and shoot from its roots.

My Loctitian friend: Our relationship has blossomed from service provider/client to real friendship. A far we a come from.

With the resources invested, imagine the trauma.

I had no intention to do a big chop on that day. But a miniature one occurred nonetheless.

As usual, I picked up some lessons from such a hairy situation and I’ll share a few primary ones with you.

Lessons in an assault on my hair

1. This hairy issue is far greater than my hair being cut when I had not asked for a cut. It’s about how I responded to the problem at hand.

Okay, the hair is cut. Even with the needle and thread to put it back together, the damage was already done.

Instead of getting angry and hurtful, I took it as a teachable moment. I told the young lady that it was okay and that she needs to be more careful. Even though it was painful, I had to move on. I also spoke with my friend and expressed how I felt without shaming or disrespecting.

It took a lot to not pull an “angry black woman with ‘dreads’ “. But I replayed moments where I had bad situations happen because of my miscalculations and I would’ve loved a gracious response.

2. Nothing lasts forever in nature.

Sometimes, forests are cut and harvested and we can’t completely understand why.

Similarly, my hair was cut (accidentally) and it’s just a ” these things unfortunately happen, sometimes”.

The response to these occurrences is to be mindful. Yes, we will water and maintain the forest, but if we aren’t vigilant, folks will come and chop trees down.

Speaking of deforestation, we need to replace the acres that we cut for the benefit of particular infrastructure. We need to find alternatives to destruction. Mother Nature is crying and we are paying the ultimate price.

3. Hair grows back! If we follow the proper and healthy regimen used to achieve the length and volume we had before, it will grow back.

And, when hair grows and is left to flourish on its own, the neat partitions showing clean scalps and well-groomed roots will appear unkempt. For me, that’s okay. It’s beautiful, actually.

Such a lesson reminds me of a quote:

Symbolic of life, hair bolts from our head[s]. Like the earth, it can be harvested, but it will rise again. We can change its colour and texture when the mood strikes us, but in time it will return to its original form, just as Nature will in time turn our precisely laid-out cities into a weed-way.

– Diane Ackerman, A Natural History of the Senses

Have you ever been in a hairy situation similar or dissimilar to mine?

Think about how you handled it, what you could’ve or should’ve done differently. What did you learn from it?