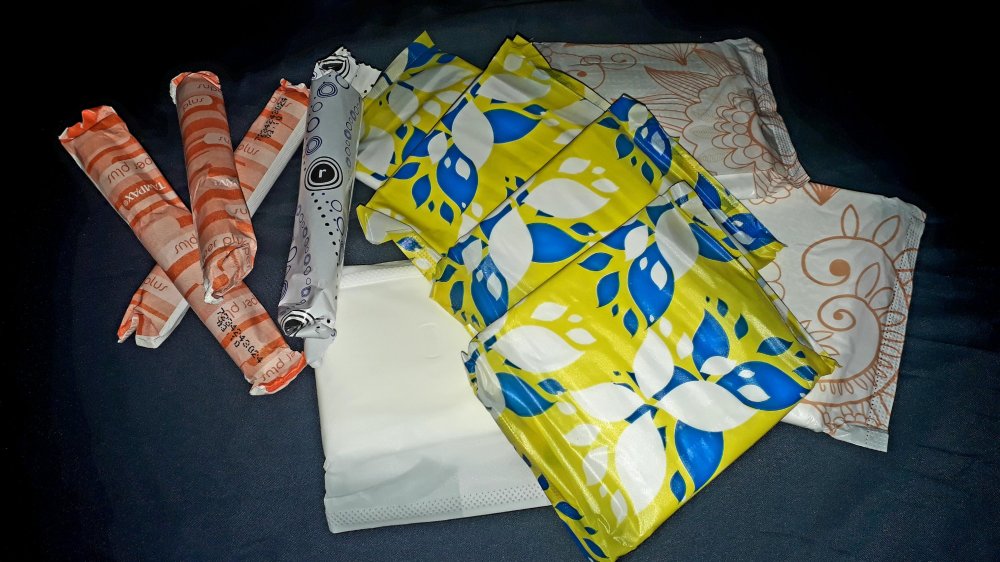 I know this story isn’t unique to my life. It cant be.

If you’re a black or brown girl from a conservative family, I’m pretty sure we can relate to the “we don’t talk about…” or “we don’t openly address…” certain matters.

Let’s be open and talk about a big ole taboo today.

Primary school was the first place I had real serious discussions about periods. I knew that my “rite of passage” was on the horizon because my mom and some female family members coloured and touched the surface with me.

However, I never felt comfortable enough to freely say the word “period” much-less, “pad” or “tampons” around strangers – boys, girls, men and women. I was taught at school to say “sanitary napkins” and “feminine hygiene products”. I was taught to call my period “my aunt from Red Hills”, “my special time” and the list continues.

I couldn’t dare to identify the products as they really are. Do that and prepare to be judged, given degrading names and laughed at. I was rather fearful of falling into those bubbles of public humiliation.

Why? Well: because my introduction to such an important aspect of girl-hood and woman-hood was unfortunately done with hushed undertones. I was conditioned to believe that such a beautiful part of growing up must be treated in a quiet manner. And according to Pavlov, you condition an unwilling subject or participant long enough, and they’ll do what is expected of them.

So I never spoke about it openly or even with great confidence. In some cases, I was miseducated and misdirected by some old age teachers who made us girls feel like we were dirty because we reached that point in our lives.

My mom and I have always had a close relationship. But, for the same societally declared taboo box that was the “your period” talk, I was afraid to tell her when I first got my period. And besides, parents never truly understood what happened to their kids. So it didn’t make sense to tell her.

In hindsight, this is beyond ridiculous. It’s totally bonkers. But, that’s how it went down.

I was in no way prepared. I did not have a kit with pads or tampons and really didn’t know what to do. My first thought was to use tissue as a makeshift blood soaker upper thingie. (Technically, this was my first pad). 😂

Luckily, I was at home when everything happened. I felt sharp pains and had a migraine. Initially, I thought it was food poisoning from bad school cafeteria food. I went to the bathroom, pulled my undies down and there was blood. I almost died.

I knew it was my period but I was still scared – though I literally thought I was about to die either from the pain or from the fact that I was bleeding to death. Haha.

Being the me that I was, I picked up the phone and called my closest friend at the time. She was queen in my eyes cause she had already started her period.

We lived a far ways from each other but she helped me to calm down. After I got calm, she put her mom on the phone and her mom told me what to do.

Based on her instructions, I went through my mom’s bathroom items and found some “real” pads, I took one and used it. My friend’s mother knew my mom… So after our conversation, she called my mom at work and told her.

I swear, it was so stressful. I didn’t want my mom to find out!

About 5 minutes later, the phone rang and it was my mom. I was ashamed and she was low-key hurt. Pure melodrama.

Point is, she got to my level and shared her story with me over the phone. I cried and she consoled me and the rest is history. That day helped to shape our relationship for the better.

Life after my period started has been totally different. Not bad, just different. Between the hormones and the pain and everything in between, it’s been a roller coaster.

I’ve had my clothes messed up with blood; I’ve forgotten to track the days and symptoms and lost track due to stressors; forgotten to pack my handy dandy period kit and had to ask other women (and in some cases women strangers) and I’ve also been knocked down really badly from excruciating period pains.

There have been times when I couldn’t move because of the pain… Abdominal pains, headaches and backaches are my main source of torture through periods.

Two weeks ago, I was beyond stressed in life and more so at work. Last week I was emotional (mostly cried and mostly displayed anger). As the saying goes “I saw red”. Little did I know that I was really about to.

I was lethargic and had serious migraines. I felt fatter than I usually do. Now I know I was just bloated like a pufferfish.

Typical period signs. But I was so stressed that I forgot about my period and focused only on the stress.

Below is a photographed conversation between a co-worker – now friend and lifesaver. I wasn’t afraid or ashamed cause I’ve been through my period enough times and I think the hushed, tiptoed approach is stupid.

If that didn’t happen, I would’ve asked another coworker and stranger or created that rolled up tissue “pad” and uncomfortably made my way to the nearest store to purchase a real pad or tampons.

I advocate for open conversations but there’s no way I would’ve asked a male coworker to help me. Just no way. That’s next-level horror movie stuff.

Why? That damn taboo conditioning.

I say all of that to say this…

Let us vow to rewrite the period narrative for our daughters and nieces. Let us alter the period conversation with our mothers, aunts and grandmothers. Let us insert the conversation into the chatter with our male friends, our brothers, boyfriends, uncles and our fathers.

Boys get the transition through their “rite of passage” with much more guidance and encouragement than girls do. Let’s change that reality. Girls ought not to feel uncomfortable or embarrassed to talk about their periods.