The only thing people should go fishing for is seafood.

I find it necessarily important for you to tell your people that the only thing they should go fishing for is fish and other seafood. Let them know that compliments don’t swim and they don’t fall prey to bait attached to a hook in water. They just don’t! I really and truly get sick and tired of folks literally pulling a compliment out of me. If a compliment is due, it will be given. Jezas peas man!

This letter is not referring to folks who have some deep rooted issues about their image, the quality of work they produce or their achievements in life. Rather, this letter makes reference to those folks who have no issues what so ever but like to feed on compliments that they beg to get.

• “Do these clothes make me look nice?” – No actually – says my mean and cruel alter ego

• “Am I hot or what?” (not really asking a rhetorical question but seeking a response) – What? – I say

• “I don’t like how this looks” (knowing within themselves that the “this” looks damn good) – Me either – says the real me to the fisher folk.

• And there are the folks who never really speak to you and out of nowhere says this – “Oh, I just had my beautiful bouncing baby. How is it that you didn’t know this? I’ve been posting the pictures all over facebook” – At this point I go “oh”. World, that’s cue for the awkward silence. Then they proceed to say this, “Everyone keeps telling me how cute he is, but I think he’s more handsome than anything else, just like his daddy. Don’t you agree?”.

Uhm miss, Go fish somewhere else. Cause the fish you seek, Compliments, does not swim in my waters.

Many a time I just agree with the disregarding statements your compliment seeking fisher folk make about themselves or just withhold my verbal response. It’s pretty funny watching the shock in their faces when I don’t feed them the compliments that they fish for. lol. Below is a photo I dedicate to the moments I agree with the disregarding statements of self. 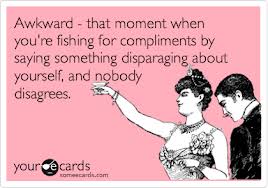 Not saying that it’s never okay to feed your fisher folk with the compliments they ask for; cause it’s nice every now and then to feel good about self, but damn it man! your people from the fishing village take it to a whole new level (knowing within themselves that there is nothing wrong).

Now I am about to provide a list of items that your fake fisher folk should really go fishing for. Host a workshop, teach a class, I don’t really care how you do it, just teach them about each item on the list. Thanks.

In your method(s) of education, World, I ask that you make your compliment seeking fisher folk know that Suburban people NEVER go fishing for anything other than seafood. We’re willing to share not just a page from our book. We are willing to give them the book. I am in no way saying  that I or my people are versed in types of fish or other seafood but I can guarantee that there is no fish or other seafood type with the name “Compliment”. If you can find such a sea creature, I shall dig my grave and bury myself right away. World, you can hold me to that.

The list provided might be limited as it refers mainly to fish found on the U.S of A market, but I’m sure my point will be understood.

The main lesson to be learned is this:

Compliment seeking fisher folk must know that they can only fish for fish and not for compliments.